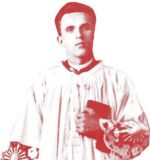 Following his rite of ordination in Gorizia on 29th June 1937, Kocjančič celebrated his first mass in Kubed the following 4th July. The ceremonial sermon was delivered by Ivan Brezavšček, who was at the time serving in the Kopriva na Krasu parish. The event organiser was the incumbent Kubed priest Jože Milič, who had invited and conducted as many as five choirs and talked the local girls into attending the event in national costumes. Some 5,000 people gathered and turned the occasion into a real manifestation of Slovenian patriotism.

It was rightfully presumed that Kocjančič would become the driving force of local patriotic movement at the time of fascist regime, which would prohibit all that would remind one of Slovenia. He was appointed chaplain of the village Buzet, which was a particularly Italianised environment. He stayed in the parish for a year.

In 1938, Kocjančič was transferred to Koštabona acting as priest and parish manager. He stayed in position for 25 years. These were surely Kocjančič’s most productive years. During this time he helped manage the Pomjan parish for nine years and the Šmarje parish for 16 years.

Alojz Kocjančič was the most genuine incarnation of France Bevk’s priest protagonist Čedermac. He was always available for the needy and struggling, even if he himself would lead a very modest life, often in straitened circumstances. He was often prosecuted for his affinity for the Slovenian language. Being fluent in Italian and German, he often helped his parishioners by negotiating their fate with the repressive authorities. He saved the village of Koštabona from burning down in 1943. Like many of the parishioners, he was anxious to see the resistance fighters liberate Istria.

He left Koštabona to be transferred to Klanec in 1963. His departure was hard both on him and the parishioners.

The tough separation from Istria in spite, he devoted entirely to his new flock and their parishes, between which he sped in his Fiat Topolino like he had been between Istrian villages. His new position also included managing the Gročana-Draga and Podgorje parishes. He became well appreciated among new parishioners aswell, who often sought his help. His sister Marija followed him to Klanec. She returned to live in Kubed after encountering some health issues in 1968, moving into the Dariš house, bought by Kocijančič.

He retired in 1974. Devoted to his calling, he would continue to perform services even once retired and of poor health in Klanec. He celebrated his 50 years of service in 1987 in Klanec, Koštabona and Kubed.

All of his life, he had the impression of not having a home of his own, which is why in his late years he worked hard on renovating the house he bought in his birth village. It was his heartfelt desire to have a roof of his own over his head but he never lived to see his wish come true. (Tanja Jakomin Kocjančič)

He passed away in Izola’s hospital on 19th November 1991. He is buried in Kubed’s cemetery.

You can find out more about which cookies we are using or switch them off in settings.

This website uses cookies so that we can provide you with the best user experience possible. Cookie information is stored in your browser and performs functions such as recognising you when you return to our website and helping our team to understand which sections of the website you find most interesting and useful.

Strictly Necessary Cookie should be enabled at all times so that we can save your preferences for cookie settings.

If you disable this cookie, we will not be able to save your preferences. This means that every time you visit this website you will need to enable or disable cookies again.

This website uses Google Analytics to collect anonymous information such as the number of visitors to the site, and the most popular pages.

Please enable Strictly Necessary Cookies first so that we can save your preferences!